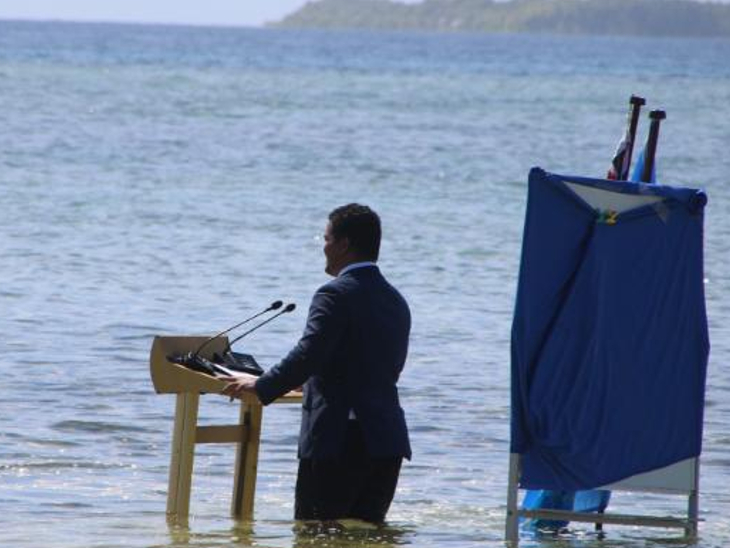 A photo is going viral on social websites. In it a man in a suit is standing in the middle of the sea and talking. This photo is of Simon Kofi, the foreign minister of the small country of Tuvalu. With this, Coffey wanted to send a message to the world and the UN about the dire consequences of ignoring climate change.

Attended the conference
The UN is hosting the COP26 Summit on Climate Change in Glasgow, Scotland. It was recently attended by heads of state. Thoughts are still going on at this summit at the official level. Koff attended. The message he recorded was sent to the UN.

Set by the sea
Koff reached the beach with his crew. A screen was put up in the background. Platform placed in front. He folded his trousers up to his knees and recorded the news. His video went viral in no time.
He said in the video that sea levels were rising rapidly due to climate change in the world and that small countries like Tuvalu were at risk of drowning. Therefore, all nations of the world must take serious and drastic measures to prevent climate change.

Climate change was also discussed at the G20 summit in Italy last month.

News on TV
The video was broadcast live on Tuvalu’s official TV TVBC. It was recorded in the middle of Funafuti, the capital of Tuvalu. The area of ​​Tuvalu is just 25.9 square kilometers. Its population is 11 thousand 792 and a total of 9 islands are included in this country.