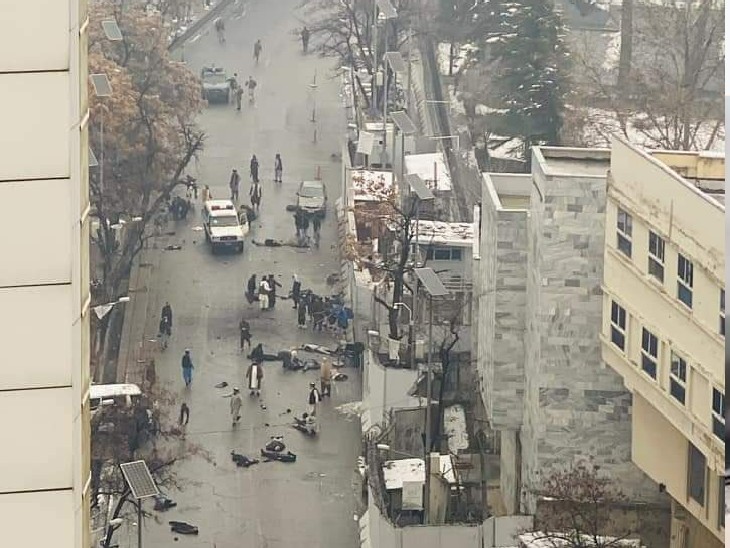 After the blast, this photo is going viral on social media. Dead bodies are seen on the ground.

A bomb exploded outside the Foreign Ministry in the Afghan capital, Kabul, on Wednesday. It has been reported that 20 people have died. However, the Taliban, who rule Afghanistan, have not disclosed any casualties in the blasts. At the time of the blast, a meeting was underway between the Taliban and Chinese officials. According to news agency AFP, it was a suicide attack.

Khalid Sadran, a spokesman for Kabul’s security department, gave an update on the blast but did not say how many people were killed.

According to reports, the explosion took place at the entrance gate of the Ministry of External Affairs.

On December 12, the Chinese Hotel was attacked
On December 12, a restaurant and guest house called Cini Hotel was attacked. A total of 3 people attacked the hotel. All three were killed. Two foreigners were injured in the incident. Media reports said several Chinese nationals were in the hotel at the time of the attack. Some scenes were also released. In this, a fire spread in a part of the hotel.

Smoke billowed from the hotel following the blast. The fire broke out on the second and third floors.

According to reports, the blast was caused by a bomb placed under the desk of a government office employee. On December 26, a police officer was killed in a blast in Badshagan province.

The Indian Embassy has also been targeted
The Indian embassy in Afghanistan has also been targeted. In August 2013, three suicide bombers attacked the embassy in Jalalabad. Afghan soldiers were also killed in this. At that time, Indian Ambassador to Afghanistan Amar Sinha met the relatives of the deceased and the injured and assured them of protection.

Apart from this, the Indian Embassy has borne the expenses for all the medical needs of the injured. In 2010, six Indians were killed in an attack on two guest houses in Kabul. In July 2008, a brigadier and two ITBP personnel were killed in a car bombing.

A series of blasts near Mazar-i-Sharif in Kabul; 16 people were killed and 22 injured

Four blasts took place one after the other in the Afghan capital, Kabul. Three blasts hit a mosque and a passenger van in the northern city of Mazar-e-Sharif. 5 people died in the explosion in the mosque. A Kabul police spokesman said two people were injured in an explosion at a mosque in Kabul. Read full story…