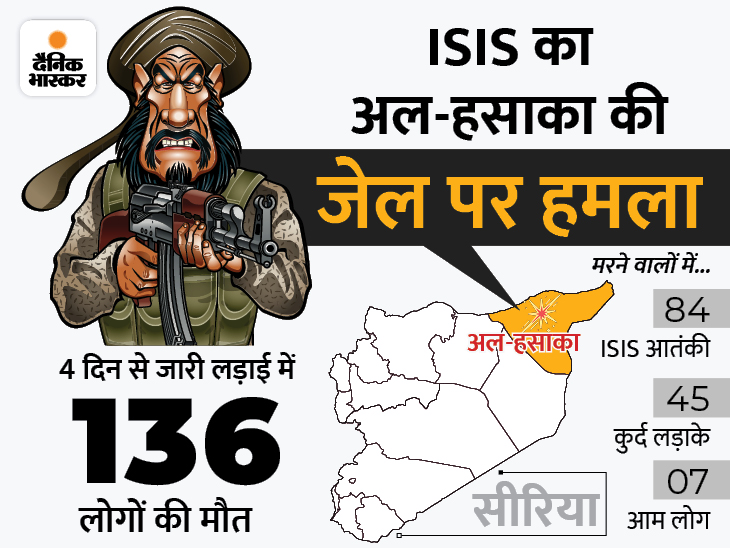 As of Sunday, 136 people have been killed in four days of clashes between Islamic State (ISIS) militants and Kurdish forces in Syria. Fighting broke out on Thursday between the terrorists and the Kurdish army. More than 100 ISIS terrorists have attacked the Qawran prison in the Syrian city of al-Hasaka to free their comrades. Following this, Kurdish forces began to retaliate against them.

ISIS militants attacked the prison, freed many of their comrades and looted a large number of weapons.

According to Britain’s Syrian Observatory for Human Rights, ISIS militants stormed a prison, freed many of their comrades and looted large quantities of weapons. Experts say the Islamic State is trying to strengthen its grip on Syria again. In recent months, many ‘sleeper cells’ associated with it have become active.

Kurdish Syrian Democratic Forces said Sunday that the area around the prison had been sealed off. Terrorists cannot live long. The media has reported that 84 ISIS terrorists and 45 Kurdish militants have been killed so far in the fighting. The dead included 7 civilians. UNICEF has demanded the protection of 850 minors detained on Sunday.

More than 12,000 members of the Islamic State are being held in various prisons in al-Hassaka.

According to Kurdish officials, criminals from more than 50 countries are being held in various prisons in the city. These include more than 12,000 Islamic State terrorists. The riot inside the jail started even before the terrorist attack. Some of these prisoners were killed.

In 2011, ISIS militants carried out large-scale attacks in Syria. It then savagely killed thousands of people, but after an attack by U.S. forces 3 years ago, their legs were snatched from the area. Currently, militants are trying to infiltrate the area again.