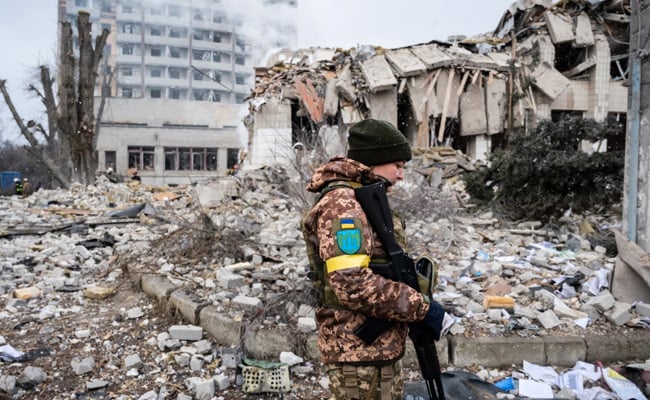 Russian President Vladimir Putin has issued a stern warning to the United States and European countries 10 days after Russia’s offensive in Ukraine. Putin said that if anyone tried to enforce a no-fly zone in Ukraine, the move would be considered a war. Putin implicitly pointed out that if any country showed courage, it would face a Russian attack. In Ukraine Russian attack On the tenth day of the (Russia-Ukraine war), Russia announced a ceasefire. Russia has said it will provide a safe corridor for civilians to leave. The Russian Defense Ministry has confirmed this and has said it will provide a humanitarian walkway from the cities of Mariupol and Volnovoka in Ukraine for the safe evacuation of civilians at 10 a.m. local time (Moscow). Russia will stop firing this time. Russia urges citizens to leave the city

Meanwhile, the European Union has suspended Russia and Belarus from the Baltic Sea Council. The European Union (EU) has said Russia and Belarus have been suspended from the Baltic Sea Council. On the other hand, Singapore has now announced sanctions on Russia. Singapore has imposed sanctions on Russia’s central bank and some other Russian banks, the foreign ministry said on Saturday. In addition, exports to Ukraine have been banned due to Russian military action.

Ukrainian President Zhelensky will address the US Senate today (Saturday). Zelensky will speak to senators through the zoom in the midst of a series of attacks by Russia. Here, three C-17 heavy lift aircraft of the Indian Air Force landed at Hindon Airport this morning. The planes have flown 629 Indian nationals from Romania, Slovakia and Poland.

Fierce fighting is raging in many cities in Ukraine, causing citizens there to flee the country. On Friday, the United States said Russia had seized Ukraine’s largest nuclear plant, after which Russia’s action was “irresponsible.” However, Russia has stated that there is no radiation from the plant and that the military has secured the site.

Direct announcements on the Ukraine-Russia crisis are here:

Prime Minister Narendra Modi will hold a high-level meeting on the crisis in Ukraine. Indians stranded in cities like Kharkiv and Sumi

Prime Minister Narendra Modi will hold a high-level meeting on the crisis in Ukraine. Indians are stranded in cities such as Kharkiv and Sumi. At the same time, Indian students stranded in Sumi have urged the government to save their lives. There is a huge explosion going on in the city.

Russia-Ukraine crisis: Russia bombing Mariupol in violation of ceasefire – Ukraine
Russia has been bombing Mariupol in defiance of the ceasefire. Ukraine has accused it of having problems evicting civilians. He said the city’s electricity and drinking water supply had been cut off. There is also a shortage of food and medicine. Mariupol is located in the Sea of ​​Azov and with its occupation Russia will completely cut off access to Ukraine’s sea.

Russia-Ukraine war: Indians trapped in Sumi, Ukraine advised not to leave
The Ministry of Foreign Affairs has advised Indian students stranded inside their homes in the war-torn city of Sumi in Ukraine, following the release of emergency news videos. A video has been released of Indian students walking alone towards the Russian border.

The chances of a nuclear deal with Iran are high

# Update The head of the UN says the International Atomic Energy Agency and Iran have agreed to adopt a “pragmatic approach” to resolving pending issues. pic.twitter.com/VnOBSW69bL

The European Union (EU) has said Russia and Belarus have been suspended from the Baltic Sea Council.

Ukraine accuses Russian soldiers of rape during the war

More than 66,200 Ukrainian men returned from abroad to fight

Ukrainian Defense Minister Oleksi Resnikov said on Saturday that 66,224 Ukrainian citizens had returned from abroad to join the struggle against Russian occupation.

US President Joe Biden has said that Russia’s attack on Ukraine is not only an attack on the country but also on Europe’s security. Speaking to reporters during a bilateral meeting with Finnish President Ninisto on Friday, Biden said the two countries have been in regular contact for some time.

PayPal has suspended its services in Russia, citing the attack on Ukraine

PayPal Holdings Inc, a digital payment company, closed its services in Russia on Saturday morning, citing the attack on Ukraine. In this way, PayPal merged with financial and technology companies that had suspended their operations in Russia after the invasion of Ukraine.

Chinese broadcasters withdrew from English Premier League broadcasts following Russian invasion of Ukraine. Now the Chinese owners have decided not to broadcast football matches this weekend in solidarity with Ukraine.

Starling was told by some governments to disrupt the Russian news: Elon Musk

Elon Musk, chairman of SpaceX, said on Saturday that its Starling satellite broadband service had been asked by some governments to block Russian news sources, not Ukraine.

An Air Asia India flight with 170 Indians from Ukraine landed in Delhi on Saturday morning from Suceava in Romania. This information was given by an airline official.

Russia announced a ceasefire, providing a corridor for civilians to leave
In Ukraine Russian attack On the tenth day of Russia, Russia announced a ceasefire. Russia has said it will provide a safe corridor for civilians to leave. The Russian Defense Ministry confirmed this and said that Moscow would provide a humanitarian walkway from the Ukrainian cities of Mariupol and Volnovoka for the safe evacuation of civilians at 10 am local time. Russia will stop firing this time.

Due to the current Ukraine crisis and unforeseen circumstances like Kovit, foreign medical graduates coming to the country will be able to complete their internship in India after passing the screening exam. The National Medical Council (NMC), the country’s regulatory body, has issued a circular to this effect.

Hardeep Puri flagged off the Indian team at Jahoni in Hungary on the train.

Union Minister Hardeep Singh Puri has sent Indians by train to Budapest on the Jahoni border in Hungary. Union Minister of Information and Broadcasting Anurag Thakur

Switzerland’s economy has been shaken by sanctions on Russia

Switzerland’s new tough stance on Russia has forced the Swiss economy to re-impose sanctions. Panic prevails in the market especially due to shortage of raw material.

Russian troops block the city of Mariupol in Ukraine

The mayor of the strategic and strategically important port city of Mariupol in Ukraine has been detained by the Russian military, the news agency AFP reported.

Samsung has blocked shipments to Russia

South Korean technology company Samsung has suspended product exports to Russia in view of the “current geopolitical situation”. With this, Samsung joins the list of other global giants such as Apple and Microsoft who stopped selling their products and services in Russia after occupying Ukraine.

In view of the Russian attacks on Ukraine, Singapore has now announced sanctions on Russia.

Singapore has imposed sanctions on Russia’s central bank and some other Russian banks, the foreign ministry said on Saturday. In addition, exports to Ukraine have been banned due to Russian military action.

CNN to suspend broadcasts in Russia after Putin’s crackdown

The Indian embassy in Ukraine has said that all means of deporting Indian nationals in Sumi are being investigated.

Exploring all possible avenues for the safe and secure evacuation of civilians in Sumi.
The identification of exit and exit routes was discussed with all intermediaries, including the Red Cross.
The control room will remain active until all of our citizens are evacuated.
Be safe and be strong

Diplomats said on Friday that the UN Security Council would hold an emergency meeting on Monday on the humanitarian crisis triggered by the Russian invasion of Ukraine.

The President of Ukraine addresses the US Senate today

Ukrainian President Zhelensky will address the US Senate on Saturday. Zelensky will speak to senators through the zoom in the midst of a series of attacks by Russia.